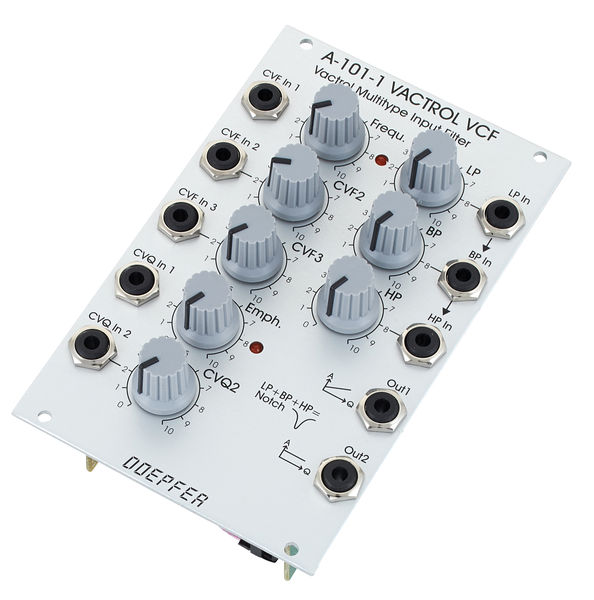 This is the first vactrol based module in the A-100 system. A vactrol is a combination of a light depending resistor (LDR) and a LED (light emitting diode) both put into a small light-proof case. For more general details about vactrols please look at the Vactrol Basics page information. Increasing the LED brightness causes a decrease of the LDR resistance (e.g. the light controlled voltage module A-179 is an application of a LDR). This effect can be used in circuits that require variable resistors to obtain the desired function (e.g. VCFs, VCAs, VC phasers, VC trigger delays, VC slew limiters, VC Envelope Generators, VC LFOs, VCOs and many more). The advantage of vactrols compared with other solutions (e.g. OTAs, diodes, transistors or FETs as variable resistors) is that they behave like a normal Ohm resistor and can handle high voltages without causing distortion. This is probably the reason why the sound of vactrol-based circuits usually is described as soft or mellow. Disadvantages are theexpenditure and consequently the expenses and the not exactly defined coherence between LED current and LDR resistance. For each vactrol the LDR resistance decreases when the LED current increases but mechanical and electrical tolerances cause that each vactrol will behave a bit different (e.g. because of the differences in alignement and distance between LED and LDR, different brightness of the LEDs at the same current). Module A-101-1 is a special multitype filter based on an idea by Nyle A. Steiner. The circuit uses the standard non-inverting amplifier filter design. Different filter types (low pass / LP, band pass / BP, high pass / HP) are realized by injecting the audio signal into different points of the circuit and using a common output for all filter types. One may feed three different audio signals into the filter simultaneously. Each signal is filtered correspondingly (LP resp. BP resp. HP) and the sum of the three filtered signals appears at the output. Of course it is possible to feed the same signal to all three inputs. In this case one obtains different combinations of LP/BP/HP according to the settings of the three input attenuators for LP/BP/HP. Even a Notch filter is possible (not available in the original design). The filter inputs are normalled, i.e. the BP input is connected to the LP jack socket provided that no cable is plugged into the BP socket (same applies for HP/BP inputs).

In contrast to the original circuit vactrols are used instead of diodes as variable resistors for frequency control of the filter. Due to the”crooked” response of vactrols the filter has not an exact frequency control standard (like V/Oct). The inevitable tolerances between different vactrols will lead to an individual sound of each module and individual resonance behaviour. Even the resonance control is realized with vactrols. Consequently this parameter is voltage controlled, too. Resonance can be increased up to self-oscillation. Resonance and consequently self-oscillation may vary with the filter frequency because of vactrol tolerances. A special feature of the module are the two audio outputs. Out 1 is the output of the original circuit. In the original circuit by Nyle A. Steiner the output level was distinctly dependent upon the resonance (higher resonance = higher output level). Out 2 compensates this behaviour by the usage of an additional vactrol that is connected in series to the vactrol that controls the resonance. This additional vactrol forms an attenuator (or simple VCA) that approximately compensates the level increase for higher resonance settings. Two LED displays show the current frequency and resonance setting.