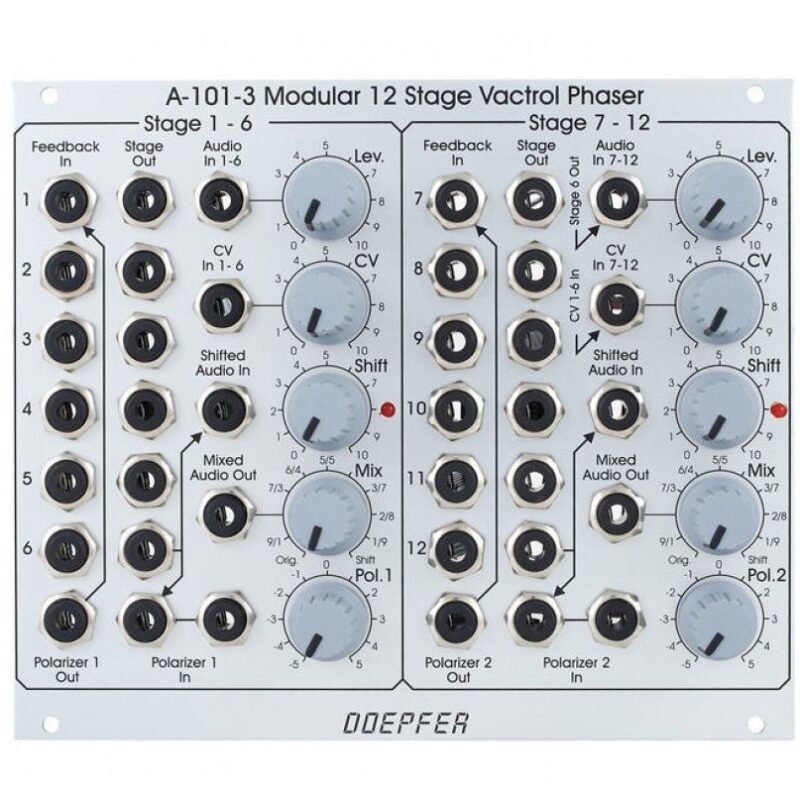 Module A-101-3 is a 12 stage phase shifter with vactrols as phase shifting elements. Vactrols are known for their smooth sound behaviour. For more general details about vactrols please look at the Vactrol Basics page.
In contrast to other phaser designs the A-101-3 is much more flexible and offering a lot of new features not available from other phasers on the market (as far as we know, please tell us if we are wrong). The main difference is that our design offers access to each of the 12 input and output stages leading to a lot of new filters that cannot be obtained in other ways. Especially the free patchable feedback loops (yes, not only one feedback loop is possible) between each of the 12 stages, the separate phase shift control for the stages 1-6 and 7-12, and the 2 polarizers intended to control the feedback loops lead to completely new filter types (a polarizer is a circuit that is able to generate positive and negative amplifications in the range -1…0…+1 with -1 = inversion, 0 = full attenuation, +1 = unchanged signal, for details concerning the polarizer function please look at the A-133 VC Polarizer or A-138c Polarizing Mixer module).

The module sketch and the frequency response curves below will help to explain the outstanding functions of the module:
Internally the module is made of 2 independent 6 stage phase shifters (1-6 reps. 7-12) with separate audio inputs (with attenuators), audio outputs (with mix control), and phase shift control units. The phase shift control units feature both manual and voltage controlled phase shifting (e.g. from a LFO, ADSR, Random Voltage, Theremin CV, Foot Controller CV …). For each sub-module a phase shift display (LED) is available. The LED shows the illumination state of the 6 vactrols of the sub-module in question as it is connected in series with the internal vactrol LEDs.

Each of the 12 phase shift states is equipped with an audio output socket and feedback input socket to obtain full flexibility to create a multitude of different filters. The audio input signal and the output signals of stage 6 resp. stage 12 are mixed with 2 manual controls to obtain effects at two audio outputs (for normal phase shifting effect this is 50% input signal and 50% phase shifted signal). The two submodules are internally connected via normalized sockets so that two 6 stage phase shifters can be obtained without external patches. Audio output of stage 6 is normalized to audio input of stage 7 and CV input 1-6 is normalized to CV input 7-12. But due to the open structure of the module even other stages than stage 6 and stage 12 can be used as outputs to generate different sounds (simply patch the desired stage output to the normalized mix input socket).

For a better understanding of the outstanding features a table with frequency response graphs is added at the end of this document.

The first 12 frequency response curves show the behaviour of the module when stages 1…12 are used as outputs for the final mixer (no feedback, no additional patching). This is the standard phaser application with a different number of phase shift stages. The frequency response curves of the higher stages show the typical comb filters of a phaser. The notches move through the audio spectrum as the manual phase shift control is operated or a control voltage is applied (for a standard phase shifter this is normally the triangle or sine wave from a LFO). The number of notches increases with the number of stages: number of notches = integer of number of stages/2. Odd stage numbers lead to different behaviours in the higher and lower frequencies (low end: high pass behaviour, high end: passage). Even stage numbers show the same response in the higher and lower frequencies (passage for both). Stage 1 is nothing but a high pass filter, stage 2 is the standard notch filter.

Additional feedback colors the sound. The third 12 frequency response curves show the behaviour of the filters with one feedback loop. Feedback comes from the stage used as output back to stage 1 (e.g. if stage 11 is used, feedback from stage 11 to stage 1).

But it is not imperative to use the same stage for feedback and audio output. Groups 4, 5 and 6 of frequency response curves show the behaviour with different feedback loops. In group 4 the same output 12 is used for all graphs but but the feedback goes from stage 12, 11, 10, 9 … and so on back to stage 1. Group 5 is nearly the same but output 6 is used for all graphs. In group 6 the output stage is the varying parameter and the feedback goes from stage 8 to 1 for all filters.

This is the result from all the response curves:

Last but not least the open structure of the module allows multiple feedback loops (e.g. stage 8 to 3 and stage 6 to 1 simultaneously) and even “forward” loops (e.g. from stage 5 to stage 9). In combination with polarizers additionally the feedback or the output polarity can be normal or inverted. This leads to a multitude of possible filter types. Some examples for multiple and forward loops are shown in the last section of the response curves. Pay attention that for some examples e.g. varying the feedback leads to “moving” peaks. By means of VCAs (A-130, A-131, A-132) or the voltage controlled polarizer A-133 the feedbacks can be voltage controlled.