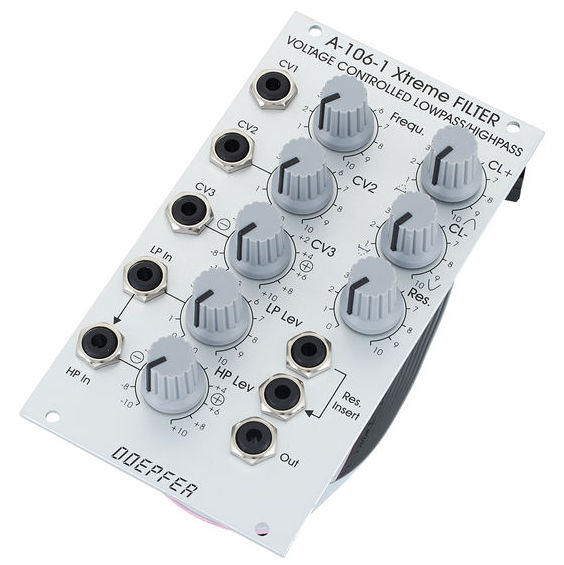 Module A-106-1 has it’s origin in our experiments to built a MS20 filter clone. The module is not exactly the same as the MS20 filter but similar. The famous original MS20 included two filters: a 12 dB lowpass and a 6dB high pass filter connected in series both with a very special design (the MS20 highpass if very often described as 12dB high pass, but this is not true). During our researches we found a way to use the same circuit simultaneously as lowpass and highpass for 2 different audio signals (a bit similar to the A-101-1 Steiner Vactrol filter that has even different audio inputs available, but with the special MS20 circuit). For this two separate audio inputs for lowpass(LP) and highpass (HP) with separate level controls are available. The sockets are normalled, i.e. the signal applied to the LP input is available for the HP input too provided that no plug is inserted into the HP input socket. The level control of the HP input is realized as a polarized input. This means that the signal can be added with the same polarity (+ range) or opposite polarity (- range) compared to the LP input. This feature enables notch (+) and bandpass (-) filter functions too. From our point of view this is the most flexible solution that enables e.g. these functions:

During the A-106-1 development we found also that it might be useful to add controls not available in the original filter design. In the original circuit the filter output level is limited to about +/- 0.7V by two antiparallel diodes across the output/resonance amplifier. By chance we discovered that removing one or both diodes leads to noticeable different behaviour of the filter. Moreover we added two rotary controls CL+ and CL- to adjust the effect of each limiting diode (from original filter behaviour, i.e. fully active limiting diodes,  to no limiting effect). The independent control for each diode allows asymmetrical limiting/amplification that causes a completely new and sometimes very strange behaviour. One of the main effects of the asymmetrical limiting is that in self-oscillation the filter does not generate a sine wave but short pulses if only one of the limiting diodes is activated. Another effect is that a higher output of the filter can be obtained (limited to about +/- 0.7V for the original circuit). In addition dirty noise effects appear at certain combinations of the control settings for resonance, CL+, CL- and input level. The controls CL+, CL-, Resonance, LP level and HP level have be looked at always in a common context: if the input levels are small the CL+ and CL- controls will have no effect as the signal does not distort at all. Increasing the resonance also increases the audio level and the CL+/CL- controls may now have an effect without changing the input level ! Same applies if the resonance control remains unchanged but the input level is increases. Now the CL+ or CL- control will have an effect as the level reaches the clipping thresholds. Increasing the audio level does also suppress the resonance if distortion becomes extreme. The “teamwork” of the five controls is very complex and has to be learned by doing and hearing.
The audio inputs are very sensitive to allow even extrem distortion effects, much more than possible with the original filter design.
We also expanded the module by an insert option for the resonance feedback loop. This allows to insert other A-100 modules into the resonance circuit. The standard application is to insert a VCA for voltage controlled resonance. But even other modules  – e.g. waveshaper, divider, phaser, distortion, PLL, wave multiplier, spring reverb, ring modulator, frequency shifter ony any other audio processing module – can be inserted to obtain sounds you have never heard before.

On top of this the module is equipped with two frequency CV inputs. One is carried out as a polarizer. This means that effect of the external CV (e.g. envelope from an ADSR A-140 or A-141) to the filter frequency is positive (+ range) or negative (- range). Especially when the filter is moved from LP to HP it might be useful to invert the polarity of the envelope CV. We also have to mention that the frequency response if far from 1V/oct but rather non-linear.

To obtain the filter section of the original MS20 two A-106-1 have to be patched in series (one in LP mode, the other in HP mode, both with CL+ and CL- set to zero).

It has to be pointed out that the A-106-1 is far away from being a “perfect” filter in an academic sense: The control scale is non-linear. With self-oscillation all sorts of waveforms except sine are generated. With high distortion and resonance settings a lot of roaring/rattling/noise or other unpredictable sounds may appear. High distortion/level may “kill” the resonance at certain settings. The filter has a significant control voltage feedthrough and is noisy. The “bandpass” is not a real band pass as a considerable share of all frequencies passes through. The notch filter does attenuate only about 50% at the center frequency – and many more. But the A-106-1 has a lot of character – much more than any other filter of the A-100. It is a very strange and awesome filter – somehow exactly the contrast to the A-108, which is a very smooth, warm and predictable filter. The A-106-1 is definitely not the right choice for “moogish” and “civilized” sounds but for extreme, exceptional and experimental sounds – this is why we call the module “X-Filter”. If you want to know more technical details please look at the A-101-1 technical details. In this document the basics of the A-101-1 (Steiner) and A-106-1 filter are described.

Included options: For the HP input control can be chosen if the polarizer is active or if a normal attenuator is available. For some applications it might be useful to have the level controls of LP and LP work in the same way (e.g. to obtain the same level for both inputs). With a jumper on the pc board the type of HP level control can be chosen. The CL+ and CL- parameters are prepared to be controlled by external vactrols. Two pin headers are used to establish a connection to the universal vactrol module that is still under development. This will allow voltage control of the CL+ and CL- parameter.

A detailed description of the module can be found in the user’s manual A1061_man.pdf