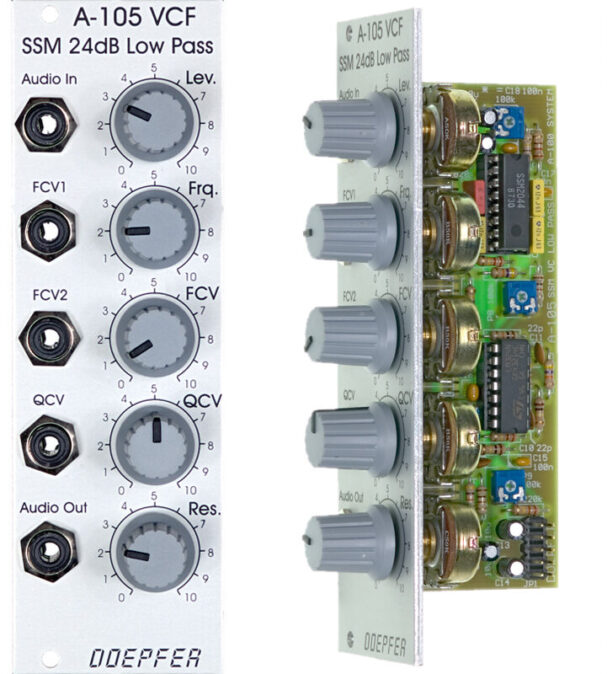 24dB low pass filter made with the legendary SSM 2044 chip

Module A-105 is another voltage-controlled low-pass filter with 24dB/octave slope. The A-105 is very similar to the A-122 that is made with a CEM chip. But in contrast to the A-122 the A-105 is made with the legendary SSM filter chip SSM2044. This chip was used e.g. in these synthesizers: Korg Polysix, Korg Mono/Poly, Fairlight II, PPG Wave 2.2 und 2.3, Emu SP-1200, Siel DK600, Siel Opera 6. The first Prophets used the SSM2040 – the precedessor of the 2044 – that generates a very similar sound. The special feature of the 4 pole low pass SSM2044 is the patented so-called “true open loop design that delivers a characteristic fat sound not available from other devices” (extract from SSM2044 data sheet). The module will feature voltage controlled resonance and a sensitve audio input to obtain distortion – if desired. Regarding to the functions, controls and in/outputs the module is identical to the 24dB low pass filter A-122 that is built around a CEM chip. But the sound, the resonance behaviour and the distortion behaviour are completely different for both modules.