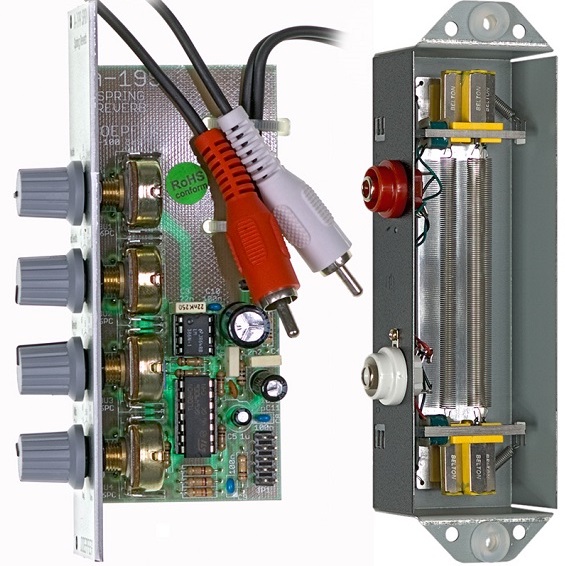 Module A-199 is a spring reverb module. The reverb effect is electronically simulated by means of  3 spiral springs. Spring reverb systems have a very characteristic sound that is based on the (insufficient) mechanical properties of the springs like signal delays, audio resonances, limited frequency range, acoustic feedback behaviour, sensitivity to mechanical shocks and others.
The 3-spring system used in the A-199 ensures a “dense” reverb because of the different properties of the three springs.

The A-199 implies some special features that are not self-evident for spring reverb units:
The reverb signal can be fed back to the input using the Feedback control. Even self-oscillation of the springs similiar to the self-oscillation of filters is available. The feedback loop can lead even via external modules like VCA, VCF, phaser, frequency shifter, vocoder, distortion/waveshaper, ring modulator and others. In this case the reverb output of the A-199 is connected to the input of the external module(s) and the output of the external module(s) is fed back to the Ext.Feedback In socket of the A-199. This socket contains a switch that interrupts the internal feedback loop as soon as a plug is inserted.
Another feature is the Emphasis control. This enables the adjustment of the accentuation of middle frequencies (around ~ 2kHz).

With the Mix control the relation between original and reverb signal appearing at the mix output is adjusted.
Using all these features very extreme and unusual effects can be generated with the A-199.

The spring reverb system is connected to the A-199 module via two cables with RCA phono connectors and placed on a suitable position in the A-100 case (or even outside for special functions). The reverb system is very sensitive to any kind of magnetic fields which cause unwanted signals (e.g. hum) in the output of the A-199 which are independent from the audio input signal of the A-199. Therefore the spring reverb system has to be placed in a big distance from any other magnetic field source (especially transformers or power supplies with transformers). We recommend to position the  spring reverb system at the left upper corner of the A-100 case. We also recommend A-100 cases that contain the power supplies A-100PSU2 or or A-100PSU3 as the A-199 has been tested with these cases/supplies. PSU2/PSU3 have much less magnetic radiation than other supplies which may cause hum noise in the A-199. If other housings or power supplies are used one has to pay attention that no magnetic radiation reached the spring reverb system. One may have to try different positions of the systems to find out the best position.
The reverb system can be mounted with screws or double-faced self-adhesive tape. There has to be sufficient space for the reverb system (about 20 x 7 x 5 cm). For special functions the reverb system can be placed also outside of the case (e.g. to strike against the system or touching/plucking the springs).
Please look at the A-199 user’s manual A199_man.pdf before you order and install the module.

Be the first to review “A-199 SPRV” Cancel reply