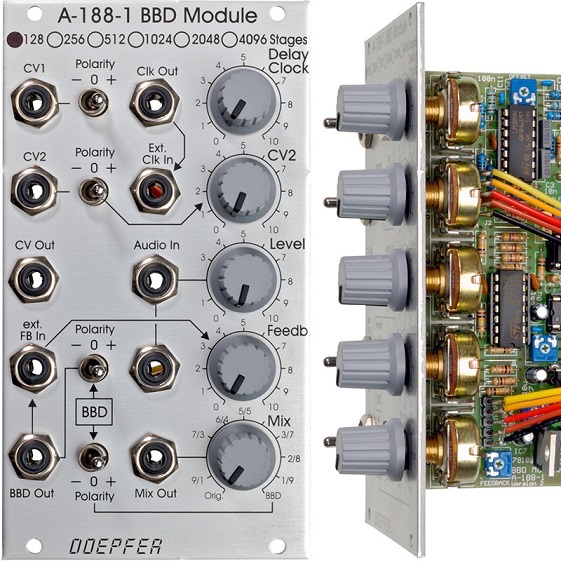 Module A-188-1 is a so-called Bucket Brigade Device module (abbr. BBD). BBDs have been s. But BBDs have some very unique advantages (or disadvantages dependent on the point of view) over the digital counterpart which result from the special properties of the BBDs. BBD circuits can be treated as a chain of Sample&Hold units (S&H) which pass on their voltages to the next S&H in the chain at each clock pulse. A more detailed explanation – including the different types of BBDs – can be found in following chapter.

In any case the sounds generated by module A-188-1 are very special. Typical applications are: Flanger, Chorus, Analog Delay or Karplus/Strong synthesis. But as the A-188-1 has a lot of very unique features (voltage controlled clock rate / delay time with extreme range, polarity switches for the CV inputs, feedback and BBD out/mix, clock and CV output of the high speed VCO, BBD clock input, feedback insert, feedback up to self-oscillation) a lot of unusual applications can be realized with the module (e.g. delay controlled by ADSR, envelope, random or sequencer with positive or negative effect). The A-188-1 also has no built-in anti-alisaing filter in order not to limit the possibilities of the module. For this the CV out is intended.

A more detailed description of the module can be found in the user’s manual A1881_man.pdf.

The above pictures shows the front panel (version 2) and the scheme of the BBD module.

These controls and in/outputs are available: