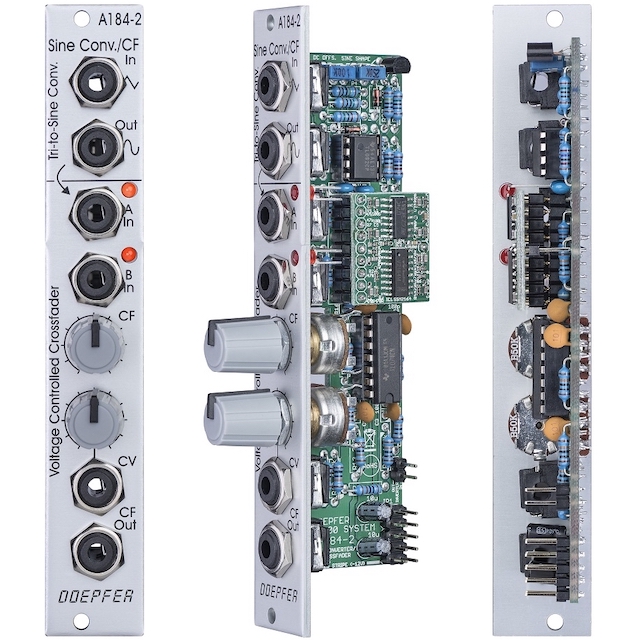 The upper section is a very precise triangle-to-sine converter (thank’s to Tim Stinchcombe who recommended this circuit). It can be used to convert any triangle waveform into a (nearly) perfect sine. The converter is much better than the simple diode converter used in the A-110-1, A-111-1, A-145 and A-147-2. Two trimming potentiometers are used to optimize the sine shape. The converter should be assigned to one VCO or LFO because the trimming potentiometers have to be re-adjusted if the input level or DC offset of the input signal changes. If the trimming potentiometers are deliberately mis-adjusted it can be used also as a waveshaper for non-sine waveforms (e.g. sine-shaped at the top of the signal and a peak at the bottom, even voltage controlled by applying an additional voltage to the waveshaping circuit, “circuit-bending” notes will be available).
The waveform converter is DC coupled and can be used also for low frequencies (e.g. LFO triangle waves).

The lower section is a voltage controlled crossfader. It has two inputs A and B. The two signals are mixed together with variable percentage. When the manual control CF is fully CCW only signal A appears at the CF Out socket. When the manual control CF is fully CW only signal B appears at the CF Out socket. In the center position of the manual control both signal appear with the same level. In addition a control voltage input CV with attenuator is available to enable voltage control of the crossfade.
Two LEDs display the crossfading shares of input A and B.
The crossfader uses two high quality VCAs (SSM2164). Inputs and outputs are DC coupled. Consequently it can be used for audio signals and slowly varying control voltages as well.

The main application is to fade between two different waveforms of a VCO or LFO or two different VCF outputs. But the module can be used for any other signals too as the waveshaper and crossfader sections are independent apart from the normalled sockets.