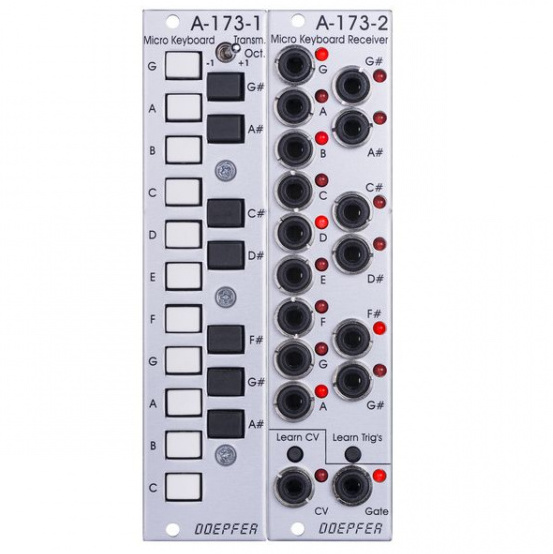 A-173-1/2 is a module combo that is used to generate a manually controlled 1V/Octave CV signal and up to 15 manually controlled gate/trigger signals. Typical applications are the transposition of a sequence by means of the CV output (without the need of an external keyboard and CV interface) and the manual generation of gate signals for start, stop, envelope generator triggering and other trigger tasks.

A-173-1 is the transmitter module and is made of a 1 ½ octaves micro keyboard and a three-position octave switch.

A-173-2 is the receiver module and generates several gate/trigger signals and a 1V/Oct. CV signal. The upper section of the module is used for the gates which are controlled by the corresponding buttons of the A-173-1. Each output can be programmed as gate (pressing/releasing the corresponding key turns the gate on/off) or toggle (pressing the corresponding key changes the state). The state of each output is displayed by an LED. To program the mode of each gate output the button “Learn Trigs” is used. While this button is operated the LEDs show the mode of each output (LED off = gate mode, LED on = toggle mode). By operation the corresponding key of the transmitter module A-173-1 the state of each output can be changed.
The lower section of the module is used the generate a 1V/Oct. CV signal and gate signal in the usual way.
By means of the “Learn CV” feature of the A-173-2 (i.e. defining the key for 0V CV) a few buttons can be separated from the CV generation section so that these buttons only control gate/trigger outputs without affecting the CV. That way e.g. start/stop or other triggers may become indepent from the CV section.  For example it’s possible to separate the lower five buttons (G to B) from the CV generation and use these buttons only for the generation of gate signals. For this the lower C has to be defined as lowest key for the CV generation. One could name this function also “keyboard splitting”. To program the split position one has to press down the button “Learn CV” and operate the key of the transmitter module A-173-1 which should be used as “split key”.
All settings (gate/toggle assignments, split point) are stored non-volatile in the module.

The modules communicate via standard midi note on/off messages and are connected internally by means of a simple two-wire cable. The cable that comes with the modules is about 30 cm long. That way the modules can be mounted at different positions within the case. Both modules are equipped with a pin header with two pins (A-173-1 = JP4, A-173-2 = JP5). The cable has to be installed with the same orientation on both connectors (e.g. black = top, red = bottom). In addition a GND sign (an upside down “T”) and the term MID (abbreviation for Midi) is printed next to each connector. GND has to be connected to GND and MID to MID. In case of a wrong connection the communcation between 173-1 and A-173-2 will not work. But nothing can be damaged.