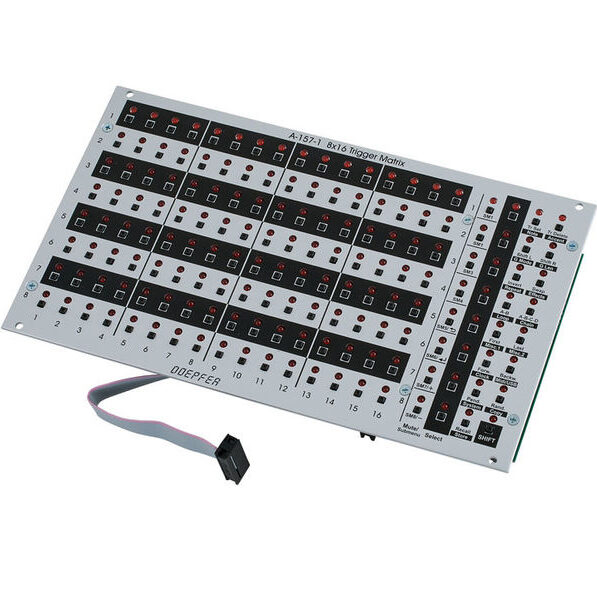 A-157 is a trigger sequencer subsystem that generates eight trigger signals controlled by a 8×16 LED/button matrix (some customers call it “Miniature Schaltwerk” as it is based on the same matrix as the no longer available Schaltwerk).
The subsystem contains three modules:

The LED/button matrix module A-157-1 is the core of the subsystem. It is used to set or reset the trigger event on each of the 16 steps of each of the 8 rows. In addition the buttons and LEDs of the matrix are used for other functions too (like setting the first and last step of each row or adressing the preset memory).
The Trigger Output module A-157-2 outputs the 8 trigger signals and has an LED display for each trigger available.
The Control Inputs module A-157-3 has manual controls and trigger inputs available for the basic control functions start, stop, reset and clock. In addition four functions inputs are available which will be used in future firmware versions to assign these inputs to special functions (e.g. shifting a row left or right by means of an external gate/trigger signal or a second set of start, stop, reset and clock for individual rows).

In addition to the main 8×16 matrix this modules contains also the buttons and LEDs for these functions:

Trigger Set / Delete: sets or resets the currently addressed step of the selected row(s) while the sequence is running

Shift Left / Shift Right: shifts the complete row(s) of all selected row(s)  to the left or to the right relative to all other (not selected) rows

Forward/Backward/Pendulum/Random: defines the running direction of the selected row(s)

Recall/Store: used to store or recall complete sequences in combination with the matrix buttons/LEDs (Firmware Update!)

This module is the master control unit for Start, Stop, Reset and Clock. In addition four function controls and inputs are available that will be used in future firmware versions to address certain functions also from external signals (e.g. shifting a row ). Each function has a manual operated button and a control input. The voltage at each input has to be +3V… +12V to trigger the function in question.

Important technical note for A-157-3: The pin header JP2 at the bottom edge of the pcb is unused so far. It is labelled “(OPTION) START/STOP/RESET BREAKOUT” and is planned for a Start/Stop/Reset/Clock breakout module. That’s why the A-157-3 module is delivered without a cable connected to JP2 !
Do no connect JP2 to the A-100 bus ! This will damage the A-157 modules and warranty is void !

The three modules are internally connected via ribbon cables and can be arranged also in another layout (e.g. A-157-2/3 on the right side of the A-157-1 or in a row above or below). The modules are available only as a complete set.

then your A157 needs a fimrware update.