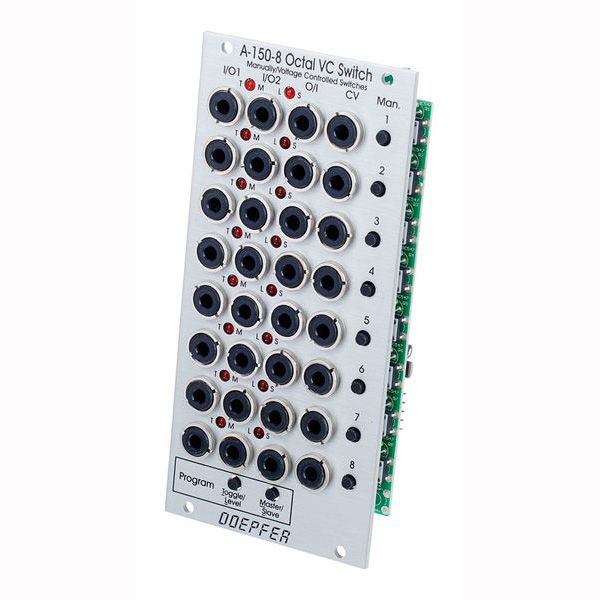 Module A-150-8 contains eight manually/voltage controlled switches. Each of the eight switches has a manual control button (Man.), a control voltage input (CV), a common Out / Input (O/I), and two In / Outputs (I/O1, I/O2). The switches are bi-directional, i.e. they can work in both directions, so can connect one input to either of two outputs, or either of two inputs to one output. Two LEDs show which in / output is active (i.e. which is connected to the common out / input). In addition the LEDs are used for the programming of the module:

For each unit the operating mode can be selected: Toggle or Level controlled. In Toggle mode the rising edge of the CV input or operating the manual control button changes the state of the switch. In Level mode the switch state is defined by the voltage applied to the CV input (low voltage = I/O1, high voltage = I/O2) or by the state of the manual control button (not pressed = I/O1, pressed = I/O2). The modes are programmed very easily: Operating the Toggle/Level button of the program section displays the current state of each switch with the LEDs: left LED on = Toggle mode, right LED on = Level mode. Operating the manual control button of the switch in question changes the toggle/level mode while the Toggle/Level button of the program section is operated. During the programming possibly patched CV signals have to be removed as the CV signals would interfere with the manual operating buttons during the programming process.

Technical note: To protect the electronic switches in case of an unsuitable patch (e.g. connection of two outputs) a 1k protection resistor is inserted into the O/I line of each switch. If control voltages used for VCOs are switched this may cause a small voltage drop and lead to undesired audible detuning. For this application we recommend to insert a CV buffer between A-150-8 and the VCO(s), e.g. A-180-3, A-180-4 or the Precision Adder A-185-2. Integrating the buffers into the module A-150-8 is not possible because this would ruin the bidirectionality of the switches.