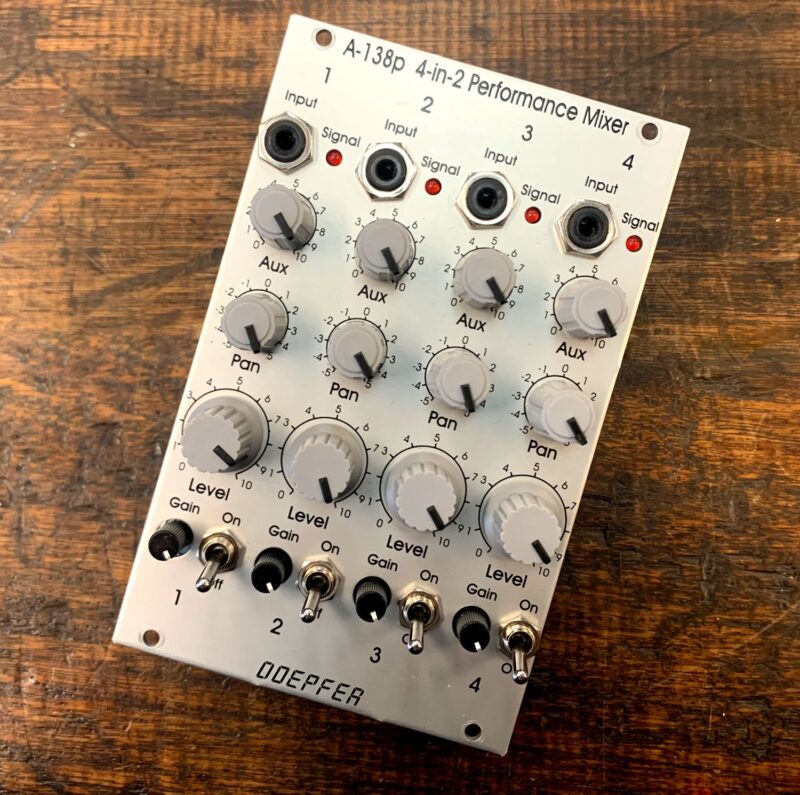 Modules A-138p/o are used to built a simple performance mixer (instead of an external stand-alone mixer). Module A-138p is the 4-fold input module, A-138o is the output module that can be combined with one or more A-138p.A-138p features:

4 channels
controls and inputs for each channelinput (3.5 mm mono socket)
signal LED (as a coarse monitor of the incoming level, the level is measured after the gain control)
mute switch
gain (control to adapt different audio levels)
Level (the main volume control, linear response curve)
Aux
Pan
internal jumper for each channel to choose between Aux pre/post main Level control
internal connection to the output module and to other A-138p modules
A-138p requires A-138o (no stand-alone use)

level controls for Left, Right and Aux
output sockets for Left, Right and Aux (3.5 mm mono sockets)
A-138o requires at least one A-138p (no stand-alone use)
Application example for Aux Send and Aux Return: looping in another module for effects (e.g. DSP module A-187-1, BBD module A-188-1, Spring Reverb A-199)
Application example for Aux Send only: pre-listening in combination with the headphone amplifier module A-139-2

The following document shows the internal wiring of A-138o and A-138p as well as the positions and functions of the jumpers and trimming potentiometers of module A-138p: A138p_3_trimming_potentiometers_and_jumpers.pdf

The voltage controlled version of the performance mixer is the module series A-135-4.

Technical note: Version 2 of the A-138p is equipped with the additional 10 pin connector JP1. It can be used to establish an internal connection to the quad envelope follower A-135-4C. Version 2 can be identified by means of the pc board labelling (A-138p PERFORMANCE MIXER VERSION 2) and the additional pin header JP1. The marker point near JP1 denotes the red wire of the 10 pin ribbon cable that can be used to establish the internal connection between A-138p and A-135-4C. Version 2 of A-138p is manufactured since about June 2017.

Be the first to review “A-138p Performance Mixer” Cancel reply