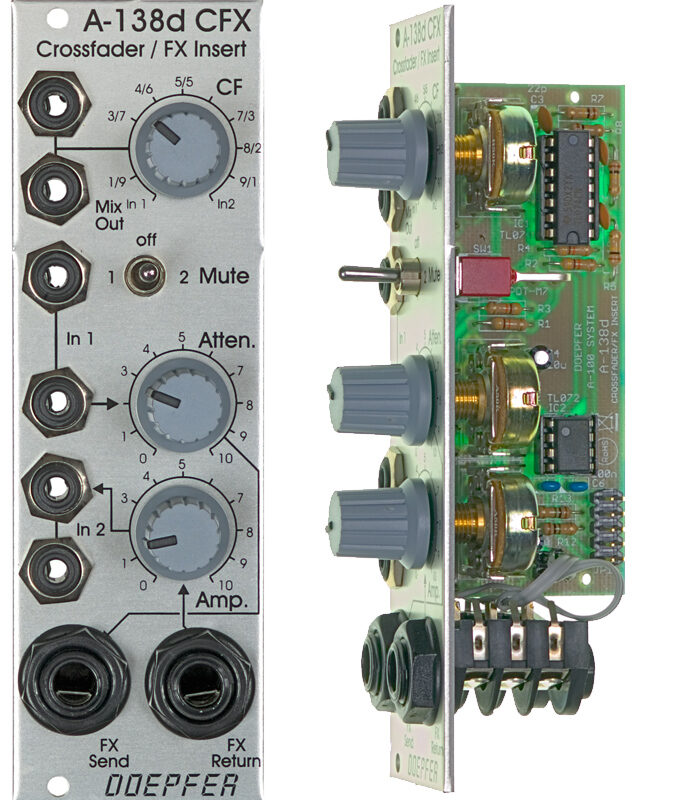 Module A-138d can be used in two different ways:

as a crossfader module within the A-100
as an insert module for external effect units (e.g. guitar stomp boxes) with dry/wet control
If the module is used as a crossfader within the A-100 the two audio signals are connected to the sockets In 1 and In 2. The position of the CF (Crossfade) control defines the relation between the levels of the signals In 1 and In 2 that appear at the Mix Output. In the leftmost position of CF only In 1 appears at the output, in the rightmost position only In 2. In the center position both inputs appear with the same level at the Mix Output. Each input is equipped with two sockets (miniature multiples) so that the input signals can be forwarded to other modules too. Even the Mix Output has two sockets available. The mute switch can be used to mute In 1 or In 2 independent of the position of the crossfade control. In the center position it has no function. The controls Atten. and Amp. and the 1/4″ sockets FX Send and FX Return are not used in this application.

If the module is used as an effect send/return module with dry/wet control the A-100 signal that has to be processed by the external effect unit is connected to In 1. The signal can be attenuated by control Atten. before it is output to the 1/4″ socket FX Send. The attenuator has been added because some effect units without input level control (especially guitar stomp boxes) will distort with A-100 levels (~ 1 Vss or more). The attenuator can be used to reduce the signal level so that no distortion occurs. Atten. is adjusted so that the external effect unit does not distort.

The output of the external effect unit is connected to the 1/4″ socket FX Return. This socket is followed by an amplifier and the control Amp. is used to amplify the signal to obtain again A-100 audio level (~ 1Vss or more). Amp is adjusted so that the loudness of both signals (i.e. original = dry = In 1 and the effect return signal = wet = In 2) have nearly the same loudness. The amplification range of the FX return amplifier is 1 to 50 (or  0 to 33dB). The output of the amplifier is normalled to the upper socket of Input 2. In this application no plug is inserted into the upper In 2 socket.

The lower In 2 socket can be used to obtain the effect return signal before it is processed by the crossfade unit of the A-138d. The CF control of the A-138d works now as a dry/wet control for the external effect. In the leftmost position of CF only the original signal (i.e. not processed) appears at the Mix Output, in the rightmost position only the effect signal. In the center position the original and the processed signal appear with the same level at the Mix Output. The mute switch can be used to mute the original or the effect signal independent of the position of the crossfade control. In the center position it has no function.

Attention: If the small sockets In 2 are used (i.e. no FX return via the 1/2″ socket) the signal has to be fed into the upper socket In 2. Then the lower socket In 2 can be used to forward the signal to another module! The upper socket In 2 is normalled to the output signal of the internal amplifier that amplifies the FX return signal. If a plug is inserted into the upper In 2 socket this internal signal is interrupted (switching contact). That’s valid even if no FX return signal is connected as in this case the output of the amplifier is ~ 0V/GND. If a plug is inserted into the lower In 2 socket only a short circuit between this signal and the output of the internal amplifier is made ! Nothing can  be damaged within the A-100 but the results will be strange. Please refer to the sketch below for internal wiring details.

The crossfader section of the module is DC coupled, i.e. it can be used also for the crossfading of CV signals (like LFOs, ADSRs)
The amplifier in the FX return path is AC coupled and cannot be used for CV signals.

Be the first to review “A-138d CFX” Cancel reply