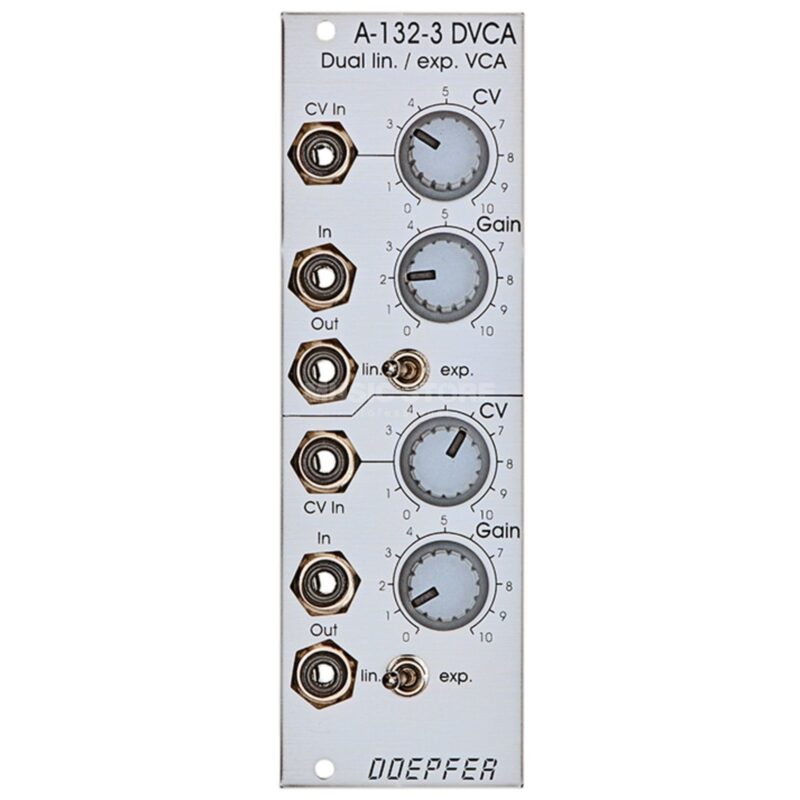 Module A-132-3 is composed of two identical voltage controlled amplifiers (VCA). Each VCA has a manual gain control and a control voltage input with attenuator. The character of the control scale can be switched to linear or exponential. All inputs and outputs are DC coupled. Consequently the VCAs can be used to process both audio and control voltages. The input has no attenuator available but is capable to process up to 16Vss signals (i.e. -8V…+8V) without distortion.

Technical note:
As the special circuit CEM3360 used in the first version of the module is longer available we had to change the design. In modules manufactured from fall 2010 the VCA circuit SSM2164 is used. This circuit is still in production and available without problems. The main difference between the old and the new version of the module is this: for the old version with CEM3360 the maximal amplification was limited to 1. Even if the control voltage is increased the amplification stucks at 1. For the new version with SSM2164 the amplification is not limited to 1. If the control voltage is increased even a higher amplification than 1 is possible. With a corresponding input level this may lead to distortion at the output because the output swing is limited to about +/-10V and clipping occurs. Amplification “1” is obtained at about position “8” (i.e. 3 o’clock position) of the manual control “Gain” for both linear and exponential mode.
Update 2020: as of the special circuit CEM3360 is available again in form of the clone circuit AS3360 the module is manufactured again with the 3360 from spring 2019.
The two versions of the module can be indentified with the help of the circuit in the middle of the pc board (CEM/AS3360 or SSM/V2164).